United Energy (UE) is a major electricity and heat producer in the northern Bohemian region. It operates a CHP plant in Komořany (near the town of Most) with a total installed electrical capacity of 239 MWe and a thermal capacity of 1,076 MWt. It supplies thermal energy to 35,000 flats in Most and Litvínov, and also to industrial enterprises, schools, health facilities, offices and various institutions. 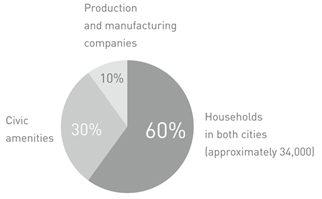